X
This site uses cookies to provide and improve your shopping experience. If you want to benefit from this improved service, please opt-in.
More Info
Accept and Shop
HALF PRICE Next Day Yodel Delivery | USE CODE YODEL24 AT CHECKOUT
Free Delivery over £40
Free Next Day Delivery over £75
International Shipping
New 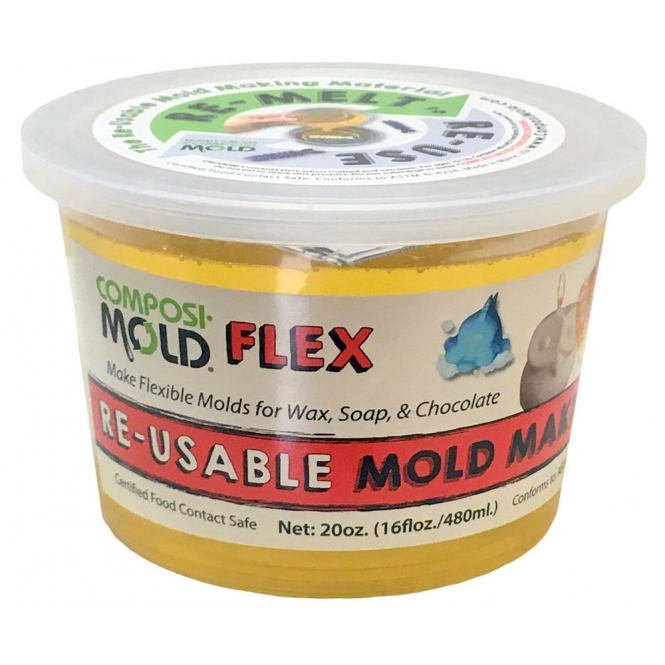 Heat and pour unique moulds to use for chocolate, sugarpaste, gumpaste and more.

ComposiMold-Flex is a flexible, re-usable moulding gel, designed specifically for moulding fragile items, as well as unusual shapes and objects.

Many casts can be made using the same mould, making it an excellent material for those wanting to learn and become involved in mould-making without having to worry about mistakes or wasting material. Simply melt and reuse once you're finished.

ComposiMold-Flex is especially well suited for chocolate mould-making because the soft flexible mould allows you to pull the mould out and away from the chocolate without breaking the chocolate.

Melting:
To melt, heat the ComposiMold to 130ºF. (Do not exceed 200ºF). This can be done in a double boiler or a microwave. When heating in the microwave start with short intervals of 30 seconds.

After melting, stir the ComposiMold gently to let the temperature equilibrate and cool before pouring your mould. It’s perfect when it has a warm honey-like consistency at (130ºF-140ºF).

Creating Your Mould:
Use clay or hot glue to anchor your original shape to the bottom of your mould box. Spray a food-safe mould release, such as vegetable oil, on the original object being moulded (the master) and in the heat-safe container that you’ll be pouring your melted ComposiMold into (mould box). Pour melted ComposiMold into the lowest area of your mould box so it will rise up and over your master part.

Solidifying Your Mould:
Simply let your mould cool. ComposiMold solidifies when it cools back to a flexible, rubbery polymer. To speed up this process, you can put your mould in the refrigerator.

De-mould your master by pulling it out or make a cut down the side of the mould and open it like a book. Tape it closed before you make your cast.

Creating Your Cast:
Use chocolate, fondant, gum paste, or other edible treats for your casting material.

Melt chocolate and pour it into your mould. You can brush an initial layer of chocolate into the mould to fill any gaps and crevices before pouring to fill the mould.

For fondant or gum paste, you may want to use a little powdered sugar to help release it from the mould. Push the fondant into the mould.

If necessary, place the mould in the refrigerator to solidify the fondant prior to removing it. Do not leave the fondant in the mould overnight.

Once solidified, remove your cast from your ComposiMold mould.