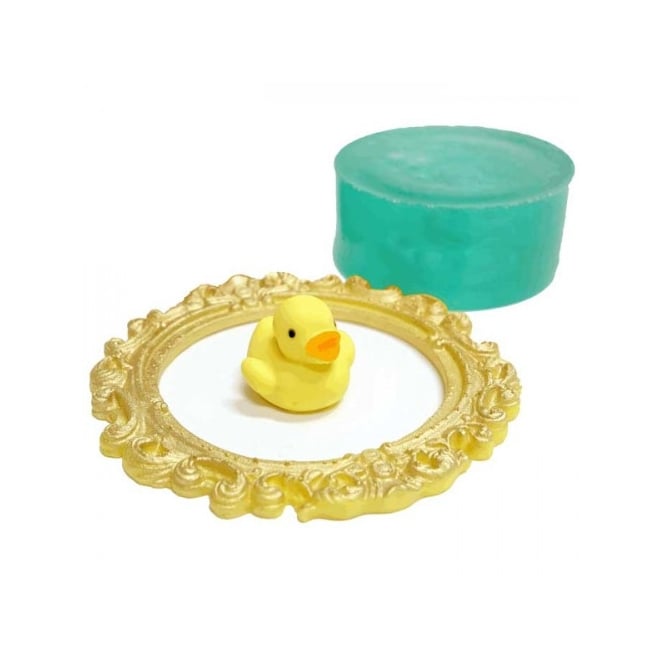 Code: 90835
(1 Customer Review)
Loading...
Order within for delivery on 7th May 2021 when choosing Next Day Delivery.
Item in Stock Item out of Stock | Usually dispatched within 24 hours

Reuse-A-Mold is the revolutionary invention by Evil Cake Genius that allows you to use the same silicone to make new moulds over and over again.

No longer will you have a draw full of bespoke moulds you may never use again. This food grade silicone is specially designed so that you can melt it, create a mould, then cut up that mould, remelt and create a whole new mould in the same way using the same Reuse-A-Mold.

Reuse-A-Mold can be used with a wide range of decorating materials including: Sugarpaste/fondant, gumpaste, florist paste, chocolate, modelling chocolate and even water to make bespoke ice cube trays!

1. Secure the thing you wish to cast a mould of to the bottom of a heat proof container with double sided tape and spray with cooking spray such as pan spray, olive oil, canola oil or vegetable oil.
2. Microwave the Reuse-A-Mold in short 30 second bursts until it is liquid.
3. Pour the Reuse-A-Mold over the thing you wish to make a mould of.
4. Allow the Reuse-A-Mold to cool back to room temperature.
5. Pop out the thing you have made a mould from and you are left with a mould that can be used for a variety of mediums.
6. When the time comes that you require a different mould, simply cut up the one you have and remelt it, following the above steps.

Reuse-A-Mold can be remelted and used again a minimum 35 times.

Full instructions are also available on the tub.

Before melting, the mould should be rinsed with cold water and then be heated immediately after in the microwave to evaporate the excess water.

Cutting the mould into pieces will speed up the heating time, but it is not required or necessary.

Once made, if using mould release, avoid using too much as it can sometimes cause defects in the mould.

Once made, if the mold is too warm and has not been allowed enough time to cool, it can occasionally break apart.  Cooling times depend on the surrounding temperature and the size of the mould, 10oz. will take approximately 30 minutes to cool in a typical freezer.

Not for use with melted candy and Isomalt.

Do not use in an oven.

Not dishwasher safe. Do not wash it hot water.