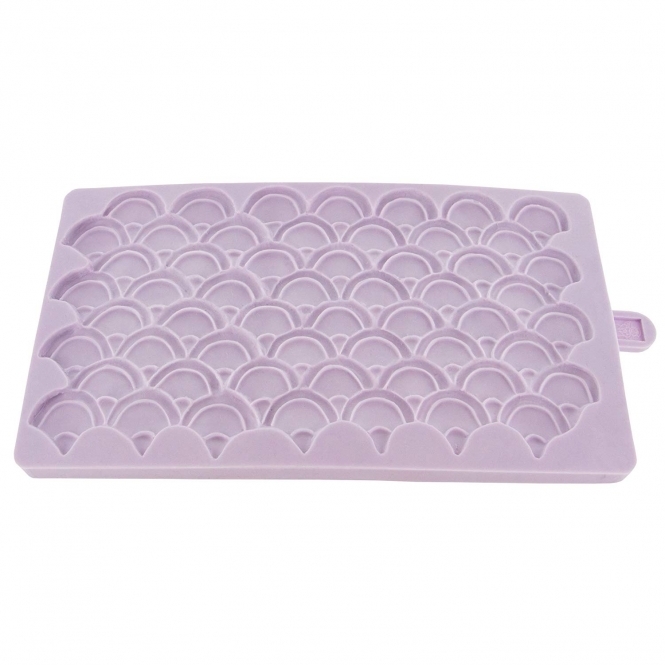 This mould is perfect for creating the illusion of mermaid scales on your cakes. You can even produce mermaid cupcakes or cookies using a circle cutter - perfect for little mermaid enthusiasts.

If mermaids aren't really your style, why not use the mould to create dragon scales? It's the same process, but with different colours and the right finishing touches, you can turn The Little Mermaid into Game of Thrones!

Made in the UK and independently tested to ensure compliance to the highest food standards.

1. Shake cornflour into the mould and turn over to tap out the excess.

3. Roll your paste firmly up to the mould until you begin to see the pattern through the back of the paste. Roll out the width of your mould, pressing firmly where the design ends and using your fingers, drag paste up to all the edges. A sharp knife can be used to gently cut away any excess paste before releasing or this can be done afterwards with a palette knife or cutting wheel.

4. Turn the mould over and gently peel the mould back, releasing the paste.

5. If attaching around the side of a cake, a straight edge can be cut using using a knife or cutting wheel.

6. Attach to the side of the cake using edible glue. When joining a second piece, the join is very well disguised within the scales pattern. If you feel that a join can be seen, use a Dresden tool or damp paintbrush to blend.