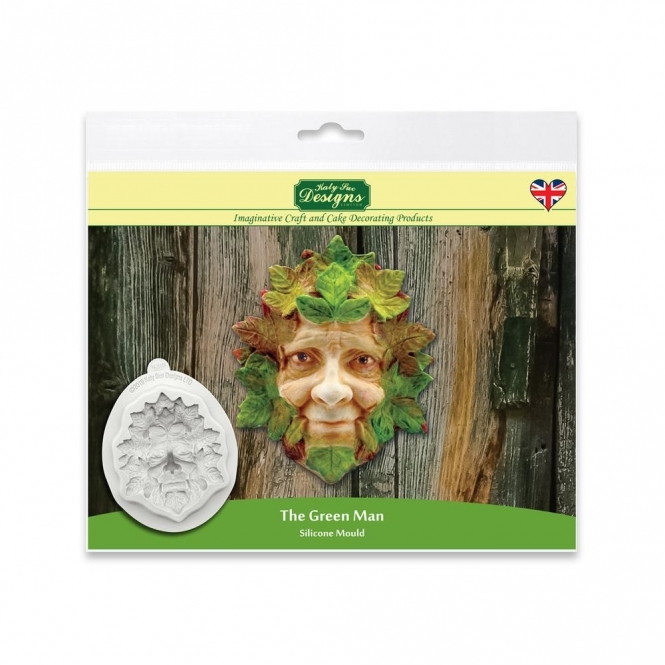 Creating forest-themed masterpieces with the new collection from Katy Sue.

This is a highly detailed character mould of the Green Man. It’s a deep mould which would be perfect for ornamental home décor crafts or as a focal embellishment for cake decorating projects.

The Green Man is primarily interpreted as a symbol of rebirth, represented in the cycle of growth each spring. It is most commonly depicted as a sculpture or other representation of a face surrounded by, or made from, leaves.

The Green Man motif has many variations. Branches or vines may sprout from the mouth, nostrils, or other parts of the face and these shoots may bear flowers or fruit.

Found in many cultures from many ages around the world, the Green Man is often related to natural vegetative deities. Often used as decorative architectural ornaments, Green Men are frequently found in carvings on both secular and ecclesiastical buildings.

Dishwasher safe, and can withstand temperatures of up to 200°c.

For best results, lightly dust with corn flour to ease release. Use a flat firm surface to push in a smooth ball of paste. Press paste evenly and firmly into mould without overfilling. Use a rolling pin and apply even pressure to ensure all areas are full and the base is flat. Scrape away any excess paste then push paste away from the edges so that paste embellishment has a clean release.

We have made some temporary changes to our couriers, prices and delivery times due to the unprecedented demand on all couriers at this time. Please allow more time for your delivery to arrive, as all couriers are having issues.

We anticipate our normal shipping rates & times to return during December.

Be the first to review Katy Sue Designs 'The Green Man' Mould. Write a review
Ask A Question
Email A Friend
Add To Compare
Free UK Delivery on all Orders Over £40 We accept Visa, Master Card, Maestro and PayPal
Our Price Promise Make purchases that best suit your needs!
Same Day Dispatch Before 4pm We deliver almost everywhere!
?
Compare (1)
Top