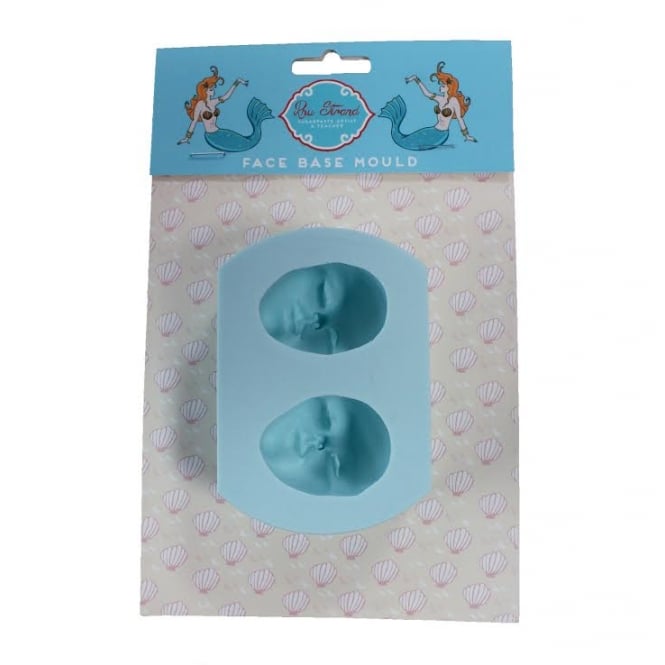 Code: 90405
(15 Customer Reviews)
Loading...
Order within for delivery on 11th May 2021 when choosing Next Day Delivery.
Item in Stock Item out of Stock | Usually dispatched within 24 hours

Rhu Strand is an award winning cake artist and has created her Face Base Mould from an original cast of faces she hand modelled.

There is a video tutorial to the left where Rhu herself shows you how to use and decorate her face mould.

Use your favourite modelling paste, sugarpaste or Rhu's favourite 'modelling mud' as a base to start your faces from. The eye sockets, nose, mouth and cheeks are created by the mould and then the rest is up to you to get creative!

Leave the face as it is or shape the chin, cheeks, mouth and more to look specifically as you want it to. Go further by changing the eye and lip colour, paint on makeup and give the face different hairstyles to make it look like the cake's recipient, a celebrity or anyone you want. Even try using different colours of paste to depict different ethnicities. The face mould it so versatile, it will be your go to for all your models.

The face of a figure can often be one of the most difficult parts to master however, with the Face Base Mould by Rhu Strand, this particular task just became easy! With full instructions provided on the packet as well as an extremely useful online tutorial and video tutorial, you'll be creating professional looking models in no time.

The mould contains 2 face designs and is made from flexible yet durable, food safe silicone so you can reuse it over and over again.

This mould is sure to be popular for those making both wedding figures as well as novelty figures and with so many ideas and designs to try out. Not only that, but the mould will also save you so much more time than modelling the face by hand, that it will give you more time to add your own decorative finishing touches.

Rhu Strand is best known for making some of the most intricate and imaginative figures in the cake world. From elegant bridal figures to novelty mermaid figures, Rhu Strand is always crafting something new and exciting, and now you can emulate her style with your own beautiful models.

Absolutely worth EVERy penny - wish Rhu would bring out the body parts too! Made a wonderful figurine, for the FIRST time it wasn't scary!!

Well pleased with this mould