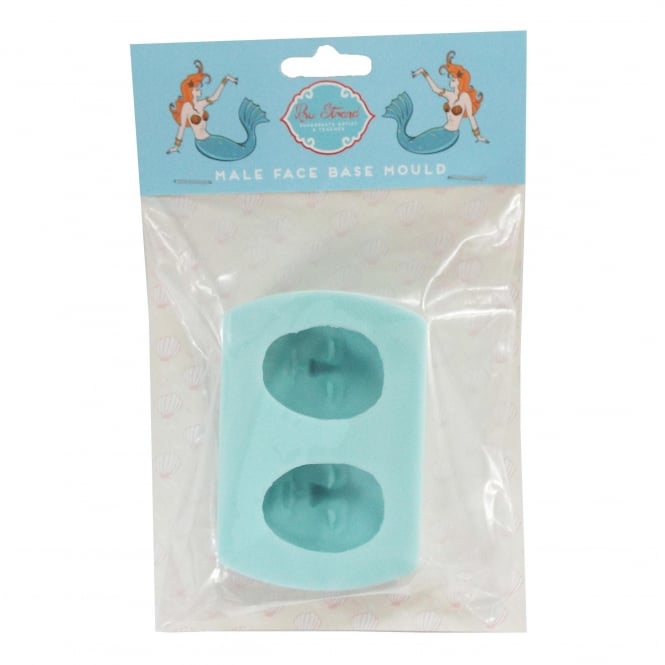 Code: 91133
Loading...
Spot Products:
Order within for delivery on 2nd March 2021 when choosing Next Day Delivery.
Item in Stock Item out of Stock | Usually dispatched within 24 hours

You may have seen some of Rhu’s amazing models in her regular features in cake decorating magazines but found the task of creating your own a little daunting. Well now things just got a whole lot easier with Rhu Strand’s Male Face Base Mould.

Similar to the original Female Face Base Mould, the male version allows you to create 2 different style male faces in no time at all.

The eye sockets, nose, mouth and cheeks are all created by the mould which then gives you the chance to customise the rest of your face however you like.

The mould will help you recreate some of Rhu’s award winning models and has been specifically designed so that you can save time when replicating their faces. No faffing for hours on end with modelling tools, just push in your modelling paste and gently turn it out.

Once the face has been turned out, the possibilities are endless. Paint the lips and eyes, add different hairstyles, shape the chin or cheeks however you like, or simply leave the face as is, it’s up to you.

The mould itself is made from the highest quality silicone which, whilst it is durable, is also flexible, allowing you to easily remove your modelling paste once moulded. To make it even easier to remove your paste, dust the mould with a little cornflour before adding your paste to stop it sticking.

The mould is extremely versatile and can be used with almost any decorating medium including sugarpaste/fondant, modelling paste, gumpaste, flower paste, marzipan modelling chocolate or even Rhu’s favourite ‘Modelling Mud’

The mould is particularly good if you are creating wedding figures, novelty toppers or just simply have a love for crafting the most amazing models.

Be the first to review The Cake Decorating Co. Male Face Base Mould by Rhu Strand. Write a review
Ask A Question
Email A Friend
Add To Compare
Free UK Delivery on all Orders Over £40 We accept Visa, Master Card, Maestro and PayPal
Our Price Promise Make purchases that best suit your needs!
Same Day Dispatch Before 4pm We deliver almost everywhere!
?
Compare (1)
Top